Numbers given are in the red Worship hymnal.


Sung Ordinary of the Mass: same as the previous six Sundays, that is, the Missa Cristo Risusciti by Luigi Picchi (1899-1970), based on the hymn tune known in German as Christ ist Erstanden and in Latin as Surgit in Haec Dies.

Alleluia: also the same as the previous six Sundays, that is, the Alleluia from the Mode II Easter chant known in Latin as O Filii et Filiae and in English as O Sons and Daughters.

Now for the music not so common to the previous Sundays/Feasts:

Entrance hymn: Hail the day that sees him rise, #471 (Listen)
- The listen link given today comes from St. Michael Church in Stillwater, Minnesota, which has used (on numerous occasions) the Gloria from Holy Angels Mass, which I wrote in 2011.

Psalm 47: God mounts his throne to shouts of joy; a blare of trumpets for the Lord, music by Robert Kreutz (response) and Joseph Gelineau, SJ (versicles).

Offertory hymn: Crown him with many crowns, #496 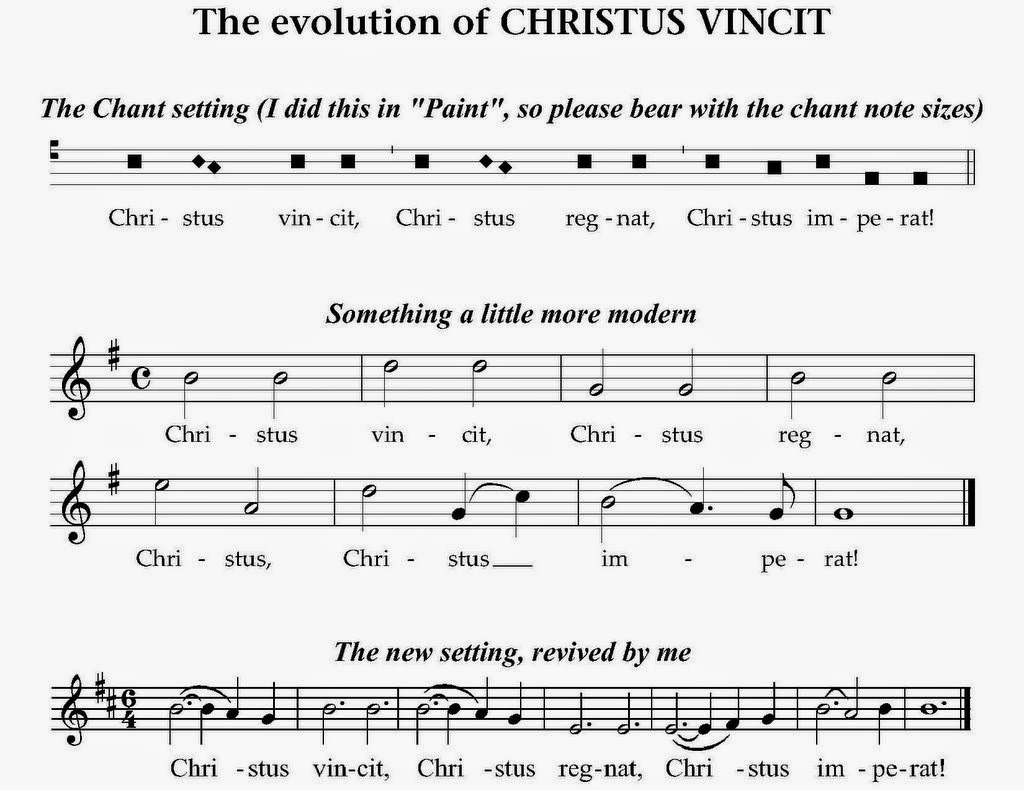 Communion anthem: Christus Vincit, music by yours truly
- Related note: I did a podcast back in 2006 in which the featured topic was "The Evolution of Christus Vincit", which went from an Ambrosian chant to a metrical Vatican rendition to the setting we are using this day, which I wrote in 1999.

All same as above except:

Psalm 27: I believe that I shall see the good things of the Lord in the land of the living, music by Columba Kelly, OSB (antiphon) and Joseph Gelineau, SJ (versicles)
- Side Note: Fr. Columba Kelly is a Benedictine from the St. Meinrad Archabbey in St. Meinrad, Indiana.  Many of Fr. Kelly's compositions (along with those of fellow Benedictine Br. Tobias Colgan) are based on, or at least emulate, Gregorian chant.

Posted by Brian Michael Page at 11:07 AM


Only three pieces are different from last week: the Responsorial Psalm (which is proper to the day), the Communion anthem (at Masses where our singers are present), and the Recessional hymn.

Psalm 66: Let all the earth cry out to God with joy, music written by yours truly


The Sung Ordinary of the Mass and the Alleluia are the same as the previous few weeks.

The Entrance hymn is in the maroon hymnal at #90: He is risen (Listen)

The Responsorial Psalm appointed for the day is Psalm 33, using the antiphon Lord, let your mercy be on us, as we place our trust in you.  Music is in Worship at #845.

The Offertory hymn is in the maroon hymnal at #89: At the Lamb's high feast we sing

The Meditation hymn is the Easter sequence Christians, to the Paschal Victim, found in the maroon hymnal at #97.

The Recessional hymn is in the maroon hymnal at #96 (first tune): The Day of Resurrection

Happy Mothers' Day to all the moms in the parish!

At 7:30 Mass, the CCD children will crown the Blessed Mother, thus the Marian opening hymn.

Sung Ordinary of the Mass and Alleluia: same as previous three weeks.

Entrance hymn: Hail, holy Queen enthroned above, Worship #702
Psalm 23: The Lord is my shepherd, there is nothing I shall want, music by Owen Alstott
- melody as written in the missalette
Offertory hymn: This joyful Eastertide, Worship #449 (Listen)
Communion anthem: Ave Maria, music by Lorenzo Perosi
Meditation hymn: On this day, O beautiful Mother, music by Louis Lambillotte (Listen)
Recessional hymn: The strife is o'er, text in Worship #451
- sung to the tune of Christ is the King (Listen)

COME SPEND SOME TIME WITH MARY...

...in the presence of Her Eucharistic Son!

Rosary and Litany are prayed.

Hymn after the Litany: Tantum Ergo, music by Oreste Ravanello

V/. Panem de caelo praestitisti eis, alleluia! (You have given them bread from heaven, alleluia!)
R/. Omne delectamentum in se habentem, alleluia! (Having all sweetness within it, alleluia!)
- Notice that the "alleluia" is added during Paschaltide.

The Blessed Sacrament is exposed, then the Divine Praises are recited.

As the Blessed Sacrament is returned to the Tabernacle: Regina Caeli

Peace,
BMP
Posted by Brian Michael Page at 11:22 AM

Ordinary of the Mass and Alleluia: same as the last two Sundays.
NOTE: No Gloria on Friday.

- As this will also be the recessional for the weekend, those attending the First Friday Mass will have a head start on this hymn.

Psalm 27: One thing I seek: to dwell in the house of the Lord, Psalm Tone 5
- see Daily Mass section of missalette for May 2 for complete text.

Offertory hymn: At the Lamb's high feast we sing, Maroon, #89
- same tune as the Epiphany hymn Songs of thankfulness and praise, which we have used before.

Psalm 16: Lord, you will show us the path of life, music by Owen Alstott
- music as written in the missalette for May 4.

Communion anthem: Omni Die Dic Mariae/Daily, daily, sing to Mary
- Alternating Latin and English verses, the latter is a translation of the former.

Recessional hymn: Christ the Lord is ris'n today, Maroon, #95
- Scroll up to First Friday's entrance hymn in this same post for the listen link.

Brian Michael Page
Married to Ann. Father of four. Grandfather of one. Involved in church music since 1975, organist since 1981, director since 1983, composer since 1984, and snark since birth!

All Masses have music, accompanied by the organ. The organist sings from the console alone at most of the Masses. We are seeking to form a choir to sing at the 11:15 Mass on Sundays, as well as major feasts.